The way in which science is like a religion

Many years ago in one of those college philosophy debates I was challenged with the assertion that science, as a way of looking at the world, had no more claim to correctness than religion. That it was, in effect, a religion itself.

(Do you remember those conversations? Everybody seemed filled with intellectual fervor and self-righteousness and the debates carried on into the wee hours. Somehow not too many people changed their minds as a result of what they heard. There's a lesson there....)

It made no sense. Maybe if the person who said it to me had bothered to explain what he meant, I would have been able to forget all about it, but I couldn't. It has hung in the back of my mind for 20 years, awaiting support or negation. Finally I figured it out:

Science is like religion in this way: it makes the fundamental assumption that events are repeatable. Science says that if you can completely describe a situation, and later completely reproduce the conditions, the same events will follow. This is somewhat trivialized by the fact that when science says "completely describe", it means all the way down to the wavefunctions of every subatomic particle. It also includes the caveat that even our best descriptions are probably incomplete because we're still learning. However, it is a very real assumption, and if you think about it, there's no reason to take repeatability for granted.

If it weren't for repeatability, cause and effect would be replaced by coincidence. Science wouldn't have a leg to stand on. On the "strictly speaking" level, this is an absurdly philosophical debate - all those wavefunctions are unknowable in practice. But on the "how should I live my life" level, it has created two large groups of people making choices based on radically different assumptions: either I can understand the world and predict the outcomes of my actions, or it's out of my hands. Of course most people use some mixture of those perspectives, and many people oscillate depending on circumstance and mood.

Repeatability has consequences for theological debates as well: if you would always make the same choice given the same conditions, then does free will exist? And if it doesn't, how can a person justly be subjected to heaven or hell after death? Maybe this is the tiny crack at the bottom of the chasm between science and religion.

The choice didn't exist 500 years ago, before the rationalists and the empiricists got going. It's strange to me that they did their work specifically because they hated the things people did out of superstition. Hate is a strong word, but guys like Voltaire devoted their lives to skewering religion just to make room for their new way of looking at the world. Now that science has brought us so many technologies, it's hardly necessary, and I'm repelled by that adversarial culture.

As you might guess, I have very much drunk the liquid nitrogen Kool-Aid. It's unfathomable to me that things might happen for no reason. But I rarely argue that others should see the world the same way, because I might be wrong. After all, I'm still learning.
By Unknown Posted Friday, October 30, 2009 4 comments:

This is the kind of literature I'm talking about. They're published by these guys, who call themselves "the cheezburger network". Now I mean no disrespect - I subscribe to an unhealthy number of their RSS feeds, plus these related ones from other entrepreneurs:A reality TV show is made by soliciting exhibitionists to improvise around a theme. They make their own humor and drama, and people watch. These websites are much the same: you come up with an idea--let's say, awkward family photos--publicize it, and watch the user submissions roll in. To make things easy on yourself, provide thumbs-up/thumbs-down buttons so your own readers can tell you what's funny. After a while, collect the highest rated ones and publish them as a book.

It's a business plan with a bottom line. Also: they're blogs.
By Unknown Posted Friday, October 16, 2009 No comments:

Email ThisBlogThis!Share to TwitterShare to FacebookShare to Pinterest
Labels: funny

According to this article, I am one of only 5% of computer users who use secure passwords.

What's a secure password? It's at least 8 characters long, mixed letters and numbers, at least one special character, and isn't in the dictionary. Why don't people use them? They don't make any sense. You can't remember random strings of text. What you can do is create functionally-random passwords that actually have meaning to you. Here's one way to do it.

First, think of your favorite pastime, hobby, or other interest - say, for example, wine. Now choose a memorable example of it; here let's work with an old favorite of ours, Markham Merlot. Cut it down (or add to it) to get it to a manageable size at least 8 characters long: MarkhamM or markhamm.

So far, this is progress: it's memorable, the correct length, and it's not in the dictionary. Why is that important? Because automated password-guessing algorithms will try every word in the English language, in addition to common choices like abc123 and phrases that can be connected to you, like your birthdate or your spouse's name. At this point you may feel frustrated, imagining that there's nothing left to use. But what's still available is proper nouns - basically anything capitalized. That's why things like rock band names often work. But we're not done yet.

Lastly we need to add some numbers and/or special characters (!@#$%, etc). My technique is to take the plain-English version of your password and replace letters with lookalikes or soundalikes. Vowels are easy: a=@, e=3, i=!, o=0. There are plenty of consonant replacements too: s=$, c=(, L=7, B=8, et cetera. These replacements are all common examples of leet-speak, the dialect adopted by early hackers to annoy the uninitiated. As a rule of thumb, I prefer to use at least two replacements. If you want to use two that require use of the shift key, put them one after the other and both on the same side of the keyboard so you can type it faster. See how practical this is?

To complete our example, we substitute #=H and @=a, and we get mark#@mm. That's easy to remember, easy to type, and almost impossible to guess--as long as you're not related to anybody named Mark Hamm.

Taken by themselves, these substitutions are inadequate, because a password guessing program can try all of them too, as variations on the dictionary and the names of your family members. But using them on a proper noun that's not associated with you makes it functionally random - at least from the perspective of automated guessers. A person who knows you might guess that you'd tweak the title of your favorite 1972 progressive rock album. Especially if they lived with you and eventually were forced to let candle wax overflow onto that record.

Of course, a greater danger than guessers is that someone will simply find your password written down--on paper, in a file on your computer, or on your PDA. Passwords that only get used once a year do get forgotten, and I confess I do record mine. However, I keep them on my PDA in a program that requires, you guessed it, a password before you can open it. That password I never forget.

The Black Angels are rock and roll the way I like it: loud, distorted, and slow. Like Neil Young circa Weld, and Low. 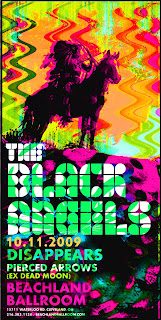 I've put their concert poster above because a few songs into the set, the singer made a gesture to the sound man about the lights. The next thing I knew, the stage was as dark as the audience. I did take this picture.... 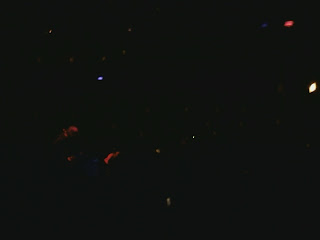 Makes you feel like you were there, doesn't it?

I failed to get a picture of the fangirl wearing the pointy ears. This is a strange thing to see outside of a comic book convention. I ended up behind her in the audience for quite a while. We had prime real estate between the speakers, in front of the stage; she spent the entire time facing away from the band. I thought about being offended, but my righteous-indignation circuits burned out years ago from overuse. Now, I'm like, whatever.

Maybe pointy ears were appropriate considering that the Black Angels occasionally remind me of Pink Floyd circa 1967. Think "A Saucerful of Secrets." This probably says a lot about why I like this band, but I don't have the musical training to explain how. So there you go. They're a hard rock Syd Barrett for the 2000s. 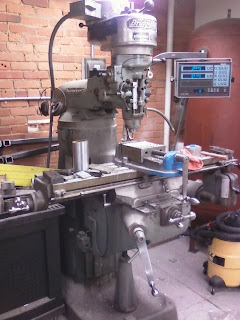 I learned to use this machine last week. My only question is, WHY NOT FIFTEEN YEARS AGO?

This Bridgeport mill is a manually operated milling machine with a digital position display. Conceptually a milling machine is like a power drill pointing downwards, with the ability to move the thing you're drilling up, down, left, right, etc. You bring the workpiece to the drill, and the tip cuts away any metal in its path. Using the display, you can decide when to stop cutting with an accuracy of a thousandth of an inch.

I used it tirelessly for hours, giggling like a toddler.

I spent much of my stint in graduate school in search of appropriately shaped pieces of metal so I could perform my experiments. I learned to use drill presses, bandsaws, grinders, press brakes, shears, and all manner of hand tools, but nobody ever inducted me into the secret brotherhood of mill users. I'll never look at a piece of aluminum the same way again.
By Unknown Posted Saturday, October 10, 2009 3 comments: 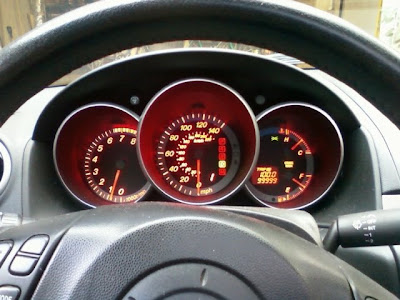 My trusty Mazda just turned over 100,000 miles. Other cars I've done the same in:(One of these things is not like the other....) This is four of the ten cars I've owned in the last 20 years. Wow, that's a lot of cars. And a strong tendency to buy used cars with high-five-digits mileage.
By Unknown Posted Friday, October 09, 2009 2 comments:

I saw this unfamiliar bottle at the liquor store and bought it just for the thrill. The truth is, there were a dozen or so unfamiliar bottles there, and this was the cheapest. Cheap thrills, that's me. 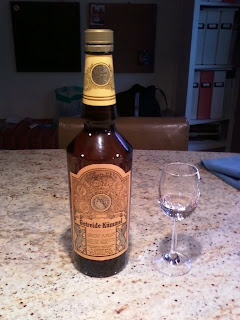 It was on the same shelf as Fernet Branca, which tastes like ass. I can happily advise you that Getreide Kummel improves upon the taste of ass by a fair margin. It is a 70 proof caraway liqueur.

Opening the bottle without reading the label or looking it up on the web, I sniffed it and thought immediately of bratwurst. ('Wait, what?') I laughed it off with a faint shudder of disbelief and poured a glass. I sniffed again. This time, not bratwurst, but rye bread. Actually, it transported me to a meal Alice makes, where a pork roast is slow cooked in a mixture of rinsed sauerkraut and barley. And caraway. And served with rye bread. Ah ... OK.

A sweet alcohol that tastes like a youth hostel is kind of like a hot girl who communicates only in Fortran. What do you do with it? But after a while, you just do what comes naturally.