"Quiet" has become an important word for me, a word that follows me around and guides me. It's part of my quest to listen to myself, to figure out what motivates me and what makes me happy. Quiet sometimes means literal silence (leave the stereo off) and sometimes it means stepping away from the chatter of the computer; sometimes it means skipping the cocktail party, or just not having wine with dinner to keep my thoughts clearer. Not all the time - but we give ourselves so many distractions and once in a while you have to get away from them. As I've thought about it and tried to practice it, I've become convinced that this is why men go fishing, or hunting, or golfing: it's quiet.

Thanks to a recommendation from John Ettorre, (with a great thread of comments) I've been slowly reading "Listening Below the Noise" by Anne D. Leclaire. Savoring it, sort of, rationing it out as I know that if I read too much at a sitting it won't sink in. On at least one stressful occasion, having read it earlier that day gave me the presence of mind to say the right thing and be a better man.

There's a whole set of skills, a mindset or a perspective, that have come into focus for me recently, related to the practice of having a directed life or a directed career. Quiet is one of the skills that contributes to identifying the direction you want to go. Passion--in my boss's words, engagement--is the hallmark of a person who is actually doing what they want to do. People who are passionate about their work go home energized, not exhausted. Networking is a skill for moving your career in that direction. If you know your direction, networking is natural. If you're reacting, instead of acting, it's not.

Noise is anaesthetic. Quiet is necessary for life.
By Unknown Posted Monday, June 29, 2009 No comments:

Yesterday I had the honor of speaking at the launch party for this great collaborative eBook and its accompanying site. Heidi Cool, the site architect, has posted a nice thorough round-up of the salient links, along with some history of the project.

My involvement was, first, to write a chapter for the eBook which appeared in draft form at this post. Then I joined the "editorial team" bringing the 19 chapters into alignment with respect to English usage. Finally, I was one of the three presenters at the launch party. I wish I'd been able to practice my talk more, but I think I got my points across.

Hmm ... I think I might clean up the "notes" portion of the presentation and make it available somewhere.

It's been a very stone-soup affair. Self-organizing, like some kind of emergent phenomenon, it was just a bunch of people with something to say getting together to speak with a unified theme. It was Dominic Litten's inspiration to start the SMCCLE, and George Nemeth's encouragement helped bring the eBook into existence. This is George's particular talent: harnessing energies without telling people what to do; identifying passions and aligning them to create a whole greater than the sum of its parts. It's been a really energizing project - thanks to all.
By Unknown Posted Thursday, June 25, 2009 No comments:

Email ThisBlogThis!Share to TwitterShare to FacebookShare to Pinterest
Labels: local 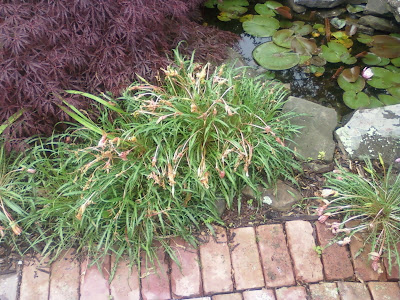 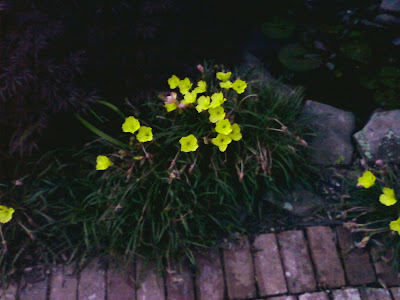 These flowers are called "night bloomers". During the day, they look like they've shriveled up, but at night, their large intense yellow petals open wide. I think they're wonderful.

Email ThisBlogThis!Share to TwitterShare to FacebookShare to Pinterest
Labels: local

Today I ran across a link saying that a PR firm had put in place a permanent ban on internal email and IM.

Ahem. Not email my coworkers?

My first reaction was, "Wow, that would be a great answer when an interviewer asks why you're looking for a job: 'they took away my email.'"

But listen to their motivations: "we were having conflict conversations over email ... in order to avoid the person, but still say what had to be said." Red flag! Once they implemented a temporary ban, they started getting positive feedback:

With email, you don’t hear the tone in someone’s voice, nor can you quickly ask for clarification. Instead, your find yourself analyzing the message: Do they sound upbeat? Are they upset? Do they not care? Now that we’re talking face-to-face, the unknowns are gone and we get to the answer much more quickly.

Well now, that sounds familiar. Tone of voice, level of interest, all these subtextual and sometimes subliminal things help us communicate. I encourage you to click through the above link to the original post and read the rich list of comments from the workers at this firm.

In related news, I'll be making an oral presentation on this topic at the Social Media Club Cleveland eBook Launch Party. I'm pretty proud of the eBook (I contributed a chapter, which also appeared on this blog) and I've become something of an evangelist on this topic.

BTW, I found this story through the Coudal Partners Fresh Signals RSS feed, a very active group microblog from a Chicago PR firm. It's highly entertaining (if often inscrutable) and IMO is actually more like a "directory of wonderful things" than BoingBoing has been in years.
By Unknown Posted Friday, June 12, 2009 3 comments:

Observation: If you're at a poker table and you can't figure out who the sucker is, it's you.

Observation: If the traffic you're driving in seems to be all idiots and no assholes, then the asshole is you.

Theorem: In situations where there are only two kinds of people, and you can only see one kind, then you are an example of the other kind.
By Unknown Posted Monday, June 08, 2009 3 comments:

My lawn has stripes. 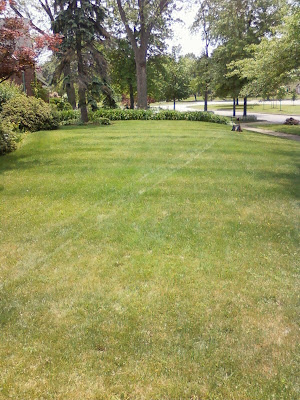 I stood in my driveway today getting ready to mow the lawn and confirmed a suspicion I've had for a couple weeks: my lawn has stripes. In this photo, especially in the more-distant parts, there are alternating light and dark green bands going from left to right.

In early spring, we spread some weed&feed on the lawn using one of those plastic push-carts that broadcasts pellets. I remember pushing it back and forth from the sidewalk (on the right above) to the house. Evidently I should have overlapped a bit more.

How to: transition from a Treo to an iPod Touch and a plain old cell phone

Times are tough. Maybe last year you had the cash to pay for your own smartphone, but now paying the phone company for that high-dollar data plan isn't so attractive. One solution is to go back to carrying two devices, a PDA and a plain old phone.

Alice and I have been Palm users for about ten years. We love the PDA functions and the third-party software, but the current Palm OS reminds me of Mac OS 7.5. It is, as they say, beyond all redemption. As I approached upgrade time for my Treo, I wanted to save money. Then in the space of a month, I talked to two people who were using the Apple iPod Touch as a PDA, because all the applications written for the iPhone will run on it too.

So I simultaneously changed PDA platforms and downgraded from a smartphone to a conventional phone. Here's how it went.

Mail:
Once logged in to Google, I linked my gmail account to the Mail app on the iPod. Poof, done. (However, this caused me a lot of grief later, which I'll post about eventually.)

Contacts:
I'm told that if I were an Outlook user, this would have been easy, but I'd been syncing the Palm to Palm Desktop. I had to export my contacts and do major cleanup in Excel. Since I now lacked a desktop PIM program, I decided to make use of an old Mac that had been collecting dust. I imported the cleaned-up data into Apple's Address Book application and synced them to the iPod. It mostly worked - the email addresses imported incorrectly and I need to fix them in Address Book.

I should note here that I tried using google sync between my iPod contacts and my gmail contacts. I don't advise it - this sync is strictly a beta-quality service from Google. Several of my gmail contacts were deleted in the attempt, though I haven't lost any email.

Passwords:
On the Palm, I kept dozens of password hints in a Contacts category with their security set to "private". There's no such thing as a private contact on the iPod, so I downloaded the mSecure app. Here, too, I had to clean up the data in Excel before re-importing it. But mSecure works really well - better, actually, than the main contacts.

Memos and to-do list:
I've had the iPod for a month and, unbelievably, I still don't have this data in it. It looks like Evernote will work for my memos; there's a desktop client and the basic service is free. But for my To Do list, I'm still searching for something with import/export that will back up its data when I sync. I tried one program that promised to sync with Google Tasks, but I discovered that only tasks with due dates get synced, and it won't import.

iPhone apps are mostly a few bucks. Mostly that's all they're worth. Your PIM data is your most valuable data; it deserves to be platform-portable, synced, and backed up. These cheap apps don't do those things.

The phone:
My provider couldn't/wouldn't (I got a lot of attitude at the tech support counter) transfer my ~500 contacts from my Treo to my new conventional phone. They literally told me my only option was to hire a 12-year-old to peck them into the phone. Horseshit. I knew the phone's manufacturer provided a software suite so I bought a data cable, but the phone wasn't supported. Ultimately I signed up for an online Contacts service with my cell phone provider, and cut-and-pasted the fifty or so most important contacts into my web browser. They synced to the phone and I'm reasonably happy.

Data:
I did get a data plan for the phone, just in case I need to Google something when I'm outside of Wifi range. Its WAP browser is thoroughly disappointing - I'll probably cancel it even though it only costs a third of what I was paying before. It's still too much to pay for something I don't use.

The iPod Touch makes my Treo feel like it was made of mud and straw baked in the sun. Looking at the Web on it is actually pleasant, which surprises me. And, oh yeah, it works pretty well for music and photos. But my new phone feels like the Motorola E815 I ditched two years ago. It's as though the user interface was designed by an engineer with a checklist of features to implement, and nobody asked the users. Surely we can do better than this.