Mind mapping and other organizational schemes

In a discussion last night, the topic of mind mapping came up. It's a way to organize information (for example, a way to take notes during a presentation) that's said to improve memory and understanding compared to traditional forms like outlining.

As I understand it, the basic difference between a mind map and any other method is that a mind map starts with a concept in the middle of a page, and proceeds outwards. The examples at the Wikipedia page above aren't great, but it strikes me that such an arrangement would be much better at drawing networks of ideas--interconnectedness--than an outline form, where indentations imply levels of abstraction and there's an implicit barrier against linking things at different levels under different branches of the outline.

This made me think of other ways of illustrating connections between ideas. 3D would be great, but it's impractical on paper. The outline is left-to-right and implies levels of abstraction: 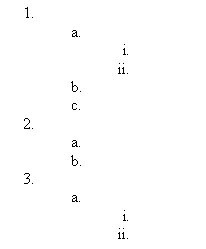 A tree structure goes from bottom to top and implies precedence--the bottom stuff came first and everything above "grew" out of it: 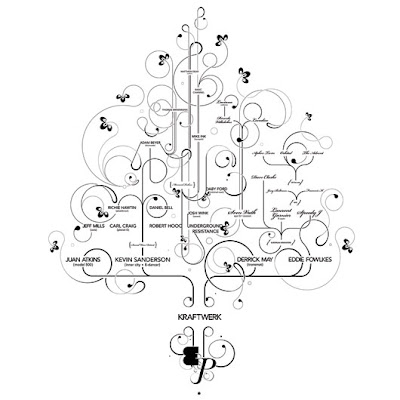 A top-down structure implies hierarchy and domains of influence. The topmost element controls those below. The classic example is an org chart: 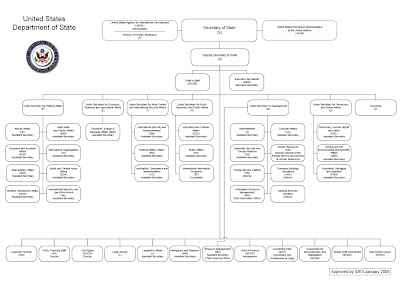 If mind mapping serves no other purpose than to sweep away all the cultural assumptions that accompany our existing ways of organizing ideas, then I'm all for it. How would you draw a network, if you had to, anyway? As interconnectedness--between people, between ideas, between places--becomes more important in a world that sees the utility in cooperation-as-equals, maybe mind mapping will become a valuable tool.

POSTSCRIPT: Of course, in the process of cruising Google Images for these kinds of diagrams, I came across a veritable zoo of structures, from simple network illustrations to those using up-to-date interactivity. There's hope for us!
By Unknown Posted Tuesday, March 31, 2009 No comments:

I've been promising people a series of posts on ways to make houses more energy efficient. My work prompts me to think about this topic, and I have been known to do some home improvement, so I have a lot of ideas. Some are practical things we can do today, and some are more like wish list items. The reasons for doing these things are to make our lives comfortable at less cost to (a) ourselves and (b) the environment.

As a scientist, I think about energy, as in conservation of energy. Energy flows into and out of our houses. Some of it we pay for, and some of it we don't. Some of it does useful work, and some of it is wasted; sometimes we even have to pay to get rid of it. I want to put some numbers on these things, and talk about strategies.

Many people have begun to think about energy efficiency with respect to cars. The hybrid revolution has inspired some fervor and people are getting educated; they're even thinking about the global warming implications of how residential electricity is generated. This topic is handled very well elsewhere, so I won't cover it, except to say that I admire the progress made and I think housing should begin to take similar steps.

I'd like to begin with a few questions to get you thinking.

Email ThisBlogThis!Share to TwitterShare to FacebookShare to Pinterest
Labels: energy

Today's xkcd comic is hilarious. I don't normally post just for the sake of linking to something, but this is actually kind of topical. I'm preparing a series of posts on residential energy efficiency. This is as good a start as any.
By Unknown Posted Monday, March 16, 2009 No comments:

Email ThisBlogThis!Share to TwitterShare to FacebookShare to Pinterest
Labels: energy

Energy Management vs. Getting Things Done

I've been trying different techniques for managing my energy level at work. With the idea that time management requires energy management, I hope to get more done by "recharging" myself with tasks I enjoy when I begin to feel drained.

However, there is a compromise. Sometimes energy management means putting off important work, such as the up-front effort of organizing your "to do list" for later when you have a chance to do it. This approach - keeping your inboxes empty - is one of the central ideas of David Allen's "getting things done" strategy.

For me, the end result this week was that I let my organizational tasks pile up in favor of doing the hands-on work I'm fired up about. Well, I let something slip, and let's just say that until now I'd never gotten a call from quite that high up in my company. No harm done, but I sat up and took notice.

It's pretty clear that there has to be a balance between doing what needs to be done and maintaining enough energy to keep doing it. Ideally, of course, you want to be in a job where you're excited about most of what you're required to do. That's what they mean by 'passion'.
By Unknown Posted Saturday, March 14, 2009 No comments:

Email ThisBlogThis!Share to TwitterShare to FacebookShare to Pinterest
Labels: professional

Make-ism: why being able to fix things matters

In the last week or two I've fixed my own garage door, installed rear shocks on my car, and replaced my house's hot water heater with the help of a friend. It'll sound cheesy, but the sense of empowerment I got from it stands in sharp contrast to the frustration I feel about, say, my phone.

I bought a house that didn't need work--not because I couldn't, but because I'd just spent four and a half years working on another house. I used to do my own car repairs too, but that was the 80s.

Now my phone ... damn. I won't bore you with a list of my grievances against it. The fact is that things do go wrong, and I can't fix them. It's immensely frustrating to rely on something and be helpless when it won't perform its function.

The economy crashed. My position on the time-money continnum shifted. So when my house broke, I fixed it. When my car broke, I fixed it. I'd been thinking about paying more per month for a new car just so it wouldn't need repair, but now I feel like I can keep driving this car even if my commute keeps scraping the suspension off the bottom of it. I feel empowered. I might actually prefer to own things I know I can repair.

So what about my smartphone? Make would tell you that if you can't open it, you don't own it. I'd extend that by saying that if you depend on it and you can't support it, it owns you. Maybe I should reduce my dependence on my smartphone: find another way to do the "smart" functions.

I'm thinking that the loss of convenience would be far outweighed by the added peace of mind.
By Unknown Posted Friday, March 13, 2009 1 comment:

I just made a First Avenue (second to last recipe at the link) and I feel like I've been reintroduced to a long-lost friend. For me, the First Avenue is the raison d'etre for oloroso sherry. 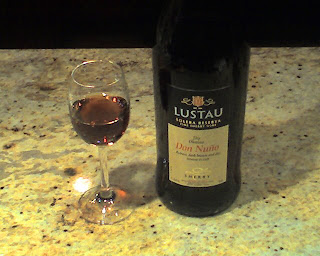 This particular sherry, Lustau's Don Nuño, is not a standout, but it's only $19. Pick up a bottle at any discerning wine shop in Cleveland and make yourself this drink. Or, hell, stop by my house and I'll make you one. This bottle will last me a good six or eight weeks.

The sherry itself is remarkably tart - not sweet at all as olorosos sometimes are - and it will fill your mind with toasted almonds as you exhale after tasting it. The First Avenue initially tempers the tartness with the sugar of the Cointreau (and colors the nuttines with orange) and later constricts your palate with the bitter Campari floated on top. It's like a clever machine made of flavors, a patent for a device that will automatically tip your hat when you nod, a manservant of dimestore novelties, all in a glass.

OK, it's a mixed drink. But I'm going to be making them until this bottle's gone.
By Unknown Posted Tuesday, March 10, 2009 No comments:

Email ThisBlogThis!Share to TwitterShare to FacebookShare to Pinterest
Labels: food

This theory was advanced to me by a coworker and I had to admit I'd had it happen to me: feeling vibrations in the area of your body where you carry your cell phone, and the phone wasn't doing anything. Sometimes even when the phone's not there.

For me, it's my left thigh. It seems to be a touch trigger-happy. A friend said it was his left pectoral - he keeps his blackberry in the pocket of his dress shirt. One day he thought he was having a heart attack.

Ask around and I don't think you'll find too many people who haven't experienced it.
By Unknown Posted Sunday, March 08, 2009 No comments: 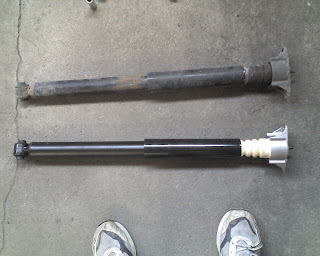 I haven't worked on my own cars in a while, but when the Mazda's shocks crapped out (it was long before I drove it around full of firewood) I heard installation of the rear ones was easy.

And it was easy ... once my cordless impact wrench recharged. It turns out that any bolt that spends five years pointed at a car tire isn't going to come off without a fight. But yeah, two bolts on top, one big one on the bottom, and out they came.
By Unknown Posted Friday, March 06, 2009 No comments: 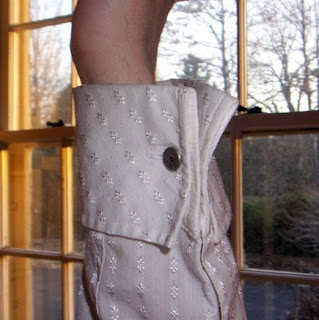 Shirts with French cuffs are in fashion, that is, they've filtered down to my pricepoint. Most of these shirts don't actually come with cufflinks--I only own one pair, from a shirt that did come with them--so I have to buy some.

The evolution of a question

Month 1: What if I won the lottery/what if I got everything I wanted?

Month 3: What do I want enough to work and suffer for it?

Month 4: What energizes me/what makes me feel good when I get it?

I'm wondering what the next question will be. They seem to be moving from the abstract to the concrete. Maybe: how, physiologically, does being energized feel?

And when will the next string of questions begin? What will they be about?

Will there be an answer? Does it matter? Is that the next quesion?