BibliOdyssey has posted a stunning collection of "marbled paper designs". When I was a child, we had some old books around the house, and I remember some having patterns like this one: 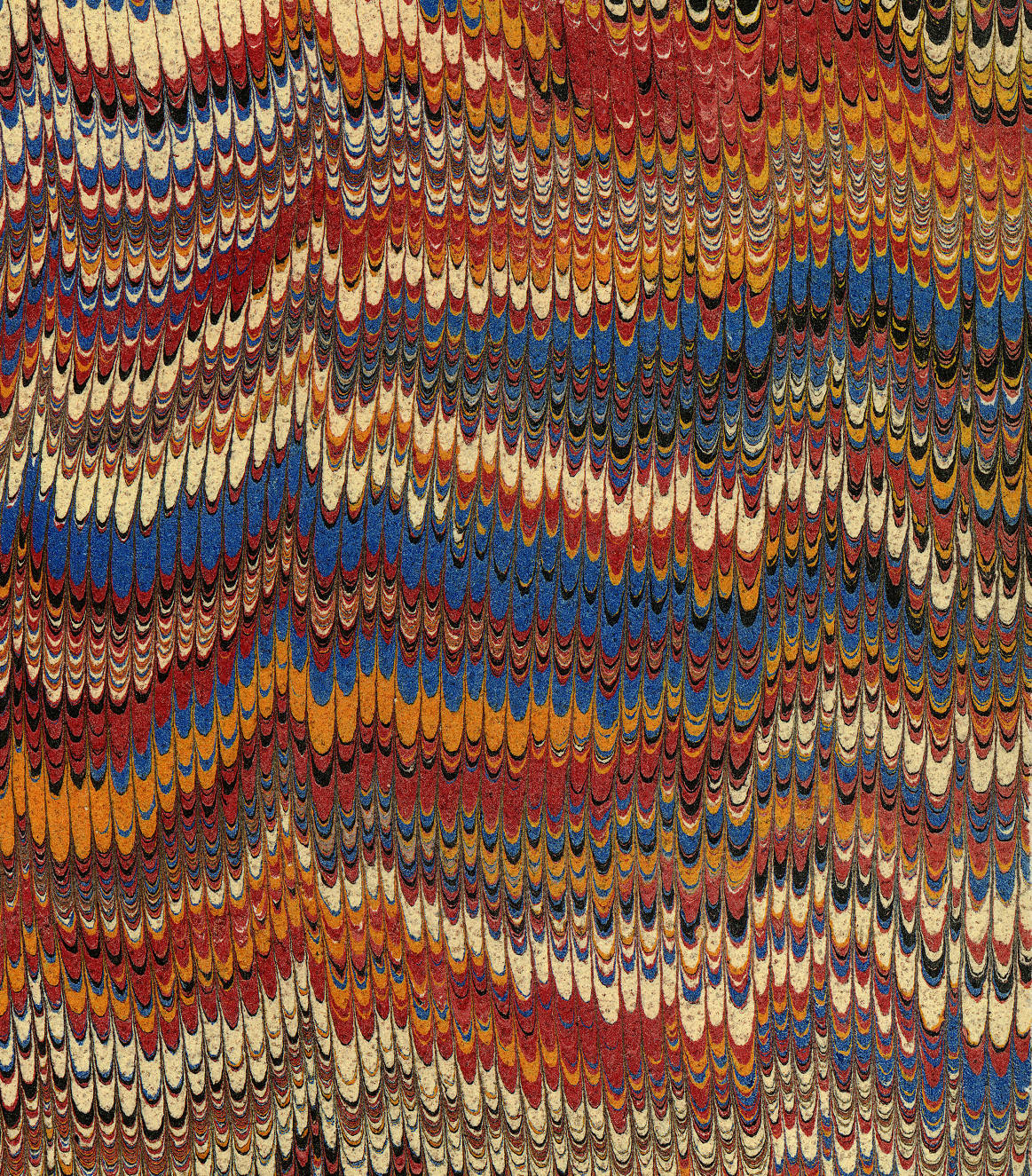 This is just the one that was familiar to me. The original post has several that are much prettier than that.

The way BibliOdyssey describes the process, it sounds quite accessible to the amateur: you take a tray of water. Toss some non-water-soluble ink on the surface of the water. Throw a piece of paper on top. Take it out of the water and let it dry. The interest comes when you use multiple ink colors, surfactants to make the ink cluster into veins or avoid an area, combs or other tools to drag the ink around, move the paper while you're gradually laying it down, et cetera.

Sounds like fun. I'm tempted to try it myself. Of course, to really take it to the next level, I'd have to make my own paper.
By Unknown Posted Monday, November 29, 2010 No comments:

Email ThisBlogThis!Share to TwitterShare to FacebookShare to Pinterest
Labels: DIY

Somebody on Facebook has been spouting anti-University of Michigan jokes. This morning I told him to shut the f*** up about Ann Arbor. I do take it personally, but there's a broader point too.

Jokes about a rival school are a lot like ethnic jokes, or jokes about religious groups or blondes or whatever. A group gets targeted and everbody else gets a few laughs at their expense. If they complain, they're told to lighten up, it's just for fun, don't overreact. All of which tells the victim that their feelings don't matter.

How does this happen? In today's example, it's easy to imagine that everyone in Cleveland is an Ohio State fan. When you believe that, it feels permissible to publicly trash-talk Ohio State's rivals. The homogeneity allows you to split the world into "us" and "them". But when you separate a group out as Others, you create a dangerous opportunity to treat them differently. It's just humor at first, but it can become disrespect, and then maltreatment. (Let's be honest, it's disrespectful to make jokes about them in the first place, and maltreatment to dismiss their feelings about it.) At its core, it's a failure, a refusal, to be understanding of differences.

This is one of the reasons I avoid ideological homogeneity too. I'm politically liberal, and many of my friends seem to be also, but when you get a bunch of liberals together in a room and they start using words like "repuglicans", I get uncomfortable.

I defend underrepresented points of view. It's one of my most deeply rooted reflexes. I do it in science because I want to know the truth, the real truth, and you can't get that by shrugging your shoulders and assuming that the information in front of you is all you need to know. You have to work hard to imagine other ways of seeing the situation. So I try to surround myself with a variety of points of view, and when someone separates a group into Others, I step in to correct that. Well, especially when the Other is me.
By Unknown Posted Monday, November 22, 2010 3 comments:

The obligation of an engineer

Doctors and firemen take oaths when they enter their careers.  Their job is, front and center, to save lives, and the public wants to see them swear they'll carry through.  Accountants and graphic designers aren't accountable in the same way.  But what about engineers?

There is a subculture within the broad field of engineering, particularly among the civil engineers who build bridges and other large structures, where it's explicitly acknowledged that getting it right is not just a matter of money, but sometimes of life and death.  The Engineer's Ring is one such acknowledgement.  When I was in graduate school, one of my fellow students wore one, and told me that the tradition dated back to the deadly collapse of the Quebec Bridge in 1907.  Due to poor design, its collapse killed 75 workers during construction. She told me that the original rings were made of steel from that bridge.  They're worn on the pinky finger of the engineer's writing hand, to drag on the table throughout the day.

It's worth remembering that somewhere down the line, somebody's safety could depend on your work.  Whenever I'm tempted to relax my standards, I remember that ultimately I have to answer to myself.
By Unknown Posted Monday, November 15, 2010 1 comment: