Yesterday Alice and I test drove two cars.  They were both stick-shift Mazda3 models, but they couldn't have been more different.  Or more different from the Mazda3 I already own.

We're looking to trade in Alice's Nissan 350Z (Esmerelda, aka the Bluebird of Happiness, aka the Barbiemobile).  On Friday she went to a dealer to test drive a Miata, but the car was sold - to someone in Minnesota - while she was driving there.  Miatas are hard to find these days.  But there was a loaded stick-shift Mazda3 on the lot, and knowing how much I like mine, she test drove it.  Why?  It isn't the car she wants long-term, but it would bring our costs down and eventually become my car when she does find what she wants. 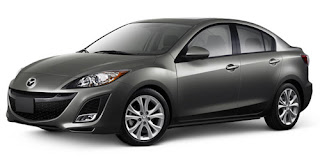 That's how we found the first 3.  We went back together Saturday to drive it together.  This car was a 2010 sedan like the photo above, with every option they offer:  dual zone climate control, nav, heated leather, everything.  They redesigned the car in 2010, giving it a really goofy grille, but this car is dark gray so it's not obnoxious.  I loved it, and I'd be thrilled to have it as my daily driver.  But Alice felt conflicted.  Its suspension and power just didn't measure up to the 350Z.  So we walked away. 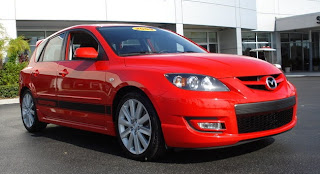 We walked next door, to an actual Mazda dealership.  Our hope was that they would at least have a new Miata that we could test drive.  And--I shouldn't have been surprised--they didn't.  But they did have a Mazdaspeed3.  This was a 2009 hatchback, pre-redesign, a much better looking car in candy-apple red.  Alice drove it and loved the suspension and extra power, but it didn't have any of the luxury features the other car did.  If what we bought was eventually going to be my car, the speed3 didn't suit me as much as the 2010, because honestly I don't care about power.  And the salesman's starting point of price negotiation was several thousand more than the other car.  Almost the sticker price of a new one.  We felt insulted.

That's our dilemma.  The 2010 has luxury and up-to-date technology throughout, and it's cheaper.  The 2009 has all the sporty character Alice wants.  The thing is, the speed3 is a boy-toy.  Driving a red hatchback wouldn't project the image she wants, so eventually it would be my car, and I'd rather have the other one.  So on Monday we're going to go back for the 2010 car.  She won't mind driving it for a while, and we'll have more time to find that elusive affordable sporty car.
By Unknown Posted Sunday, August 21, 2011 No comments:

These Brief Reviews of Brief Meals posts focus on the after-work food available on the near West side of Cleveland.

Momocho is a "mod mex" restaurant and bar; for the year or two I've been coming there, their happy hour has reliably offered one food special:  half price taquitos.  They're excellent, filling, a bargain, and there are fifteen or twenty kinds to choose from.  You can also get margaritas at a reduced price - most recently, the one on special was the traditional recipe.  It was predictably excellent, with plenty of lime and not too much sugar.  Some margaritas make me feel like I've chugged a rum and Mountain Dew; not this one.

Momocho is chef Eric Williams' main haunt; he's also a partner at the Happy Dog, and you'll see many of his sauces in both places.  (This does cause me a little cognitive dissonance.)  The bar is bright, lively bordering on the noisy side, and really popular.  I once arrived at 5:10PM on a Thursday and couldn't get a seat.  The staff is professional and friendly without being intrusive - they've usually got their hands full.  The vibe is of groups of people there for some occasion, maybe a rare after-work gathering or starting the night with food before moving on to clubbier venues.  Friendly with a dash of nervous laughter.

I've had several of the taquitos offerings (it's a dish of filling, with sauces and tortillas on the side) and never been disappointed.  Last week I had the one with ground lamb shoulder; it's supposed to have mint, but that was probably drowned out by the mole sauce.  About halfway through, I realized what it reminded me of:  the Irish bar classic shepherd's pie.  Without the mashed potatoes, of course.  Besides that one, I can recommend the machaca and carnitas; I know I've had others, but I can't remember which.

I'm always surprised at how good Momocho is.  The cucumber margaritas are a revelation.  It's even cheap.  And you can't ask for more than that after work.
By Unknown Posted Saturday, August 20, 2011 No comments:

Everything in this post, starting after this sentence, was generated by accepting suggestions from Google Scribe; I also used it in my last post.

This is like automatic paintball painting and surreal imagery.  Trying to make sense.   Maybe just go with the flow.   What will it suggests next?   Passenger in a automatic car pretty scary.   Cannot type what I want when machining doesn't suggest it, dammit.   Feel like a pinball in a machine.   Constraints like haiku.   Does it add anything to the results?  Humor maybe.  Enough of this.
By Unknown Posted Friday, August 19, 2011 1 comment:

My wife has been accused of viewing a restaurant's menu more as a list of ingredients than as a list of finished dishes.  She often asks them to make something special for her.  Here's the thing:  I'm kind of the same way about technical results.  When a coworker gives me a report with some experiments and the conclusions they've drawn, I'm likely to go straight to the data and come up with my own conclusions.  Data, of course, are the ingredients of a technical argument.


(I can't help it.  All my training and inclinations drive me to take observations and generate abstractions from them.  I will not be satisfied with someone else's abstractions if I get a chance to see the data.  Trust plays a role here, as does the fact that people learn best what they figure out for themselves.  As for Alice, she might order "off the menu" simply out of personal preference, but trust might have something to do with it too.  She might look at a menu, see a parade of bad combinations, and simply lose faith in the ability of the kitchen to produce something good without her guidance.)

The work of the chef and the work of the scientist are not so different.  I've always said that mine is a creative job.  They call us "knowledge workers".  We start with the elemental and construct something novel.  Ingredients become new forms of sustenance, or new areas of human knowledge.

I'm writing this post in Blogger In Draft, with the "Google Scribe" feature on.  As you type, it offers suggestions on what word you might be in the middle of typing,  or might want to type next.  It is the strangest damn thing I've ever experienced.  It feels like someone is constantly interrupting me, or trying to finish my sentences.  I'm tempted to use it to write a blog post about nothing, just by letting it dictate the next word and see what the infinite monkeys produce.  They're developing self-driving cars--in fact, Google is part of the effort--next, will we get automatically generated art?
By Unknown Posted Thursday, August 18, 2011 No comments:

The Blackout Party (it's not what you think)

Last night I went to a party to commemorate a disaster.  On August 14, 2003, the northeastern United States suffered cascading power failures that left tens of millions of people in the dark for days.  To the best of my knowledge, no one at our party blacked out.

The restaurant/bar Melt has been holding a Blackout Party every year on that date, turning off the lights and TVs and serving dark beers in the dark.  Well, it wasn't very dark at 5PM with the windows open, but it was cozy anyway, and everybody looks better by candlelight.  Good thing, because we waited two hours for a table.  The company of good friends and the availability of Stone's Sublimely Self-Righteous Ale (yes, they really named it that), made the wait a pleasant one.

I'm surprised to learn now that the power failures initiated in the Cleveland area; I wasn't living here at the time.  Apparently trees had grown too close to several important power lines, and when they were asked to carry extra capacity, they came into contact with the trees and failed.


(Here's something sciencey:  the extra current the wires were carrying caused them to heat up like resistors, which caused them to expand, in turn causing them to droop, which brought them into contact with the local foliage, which shorted them out to ground.  You gotta watch out for thermal expansion.)

Having just spent a hard day hacking back bushes in my yard, I can testify to how much effort it takes to keep Ohio's greenery under control.  Still, it sounds like First Energy kind of fell down on the job that day.

Where was I?  In August of 2003 I was living in the Chicago area, hard at work renovating our first house.  We had frequent power outages, some of them long enough that we became concerned for our elderly neighbors, but we weren't affected by the Big One.  Perhaps Chicago had earned immunity eight years earlier with a deadly heat wave.  To the best of my knowledge, nobody commemorates that dark week.
By Unknown Posted Monday, August 15, 2011 No comments:

When you were a teen, you probably had songs that you listened to over and over, laying in your bed or huddled in the corner wearing headphones.  You weren't the only one.  Did you ever wonder why music is so popular with young people?

Well, what is our music about?  Mostly it isn't about our schoolwork or our jobs, our laughter or our arguments, the safe things that occupy our everyday lives.  It's about more ... I think the right word is "intense" ... feelings.  Love.  Anger.  Ecstacy, delirium.  Scary stuff, it makes you act in ways you normally wouldn't.  I've begun to think that music is our way of getting used to those raw states of mind so we're prepared for them when they happen to us.
Why would we need that?  Here's my guess:  we are, as a culture, notoriously blind to our own emotional and even physical states.  Our minds are swimming with distractions created by consumerism; we're manipulated by advertising and fantasies in our media that are all constructed to maintain this capitalist world.  All that outside influence has a toll:  we may not have the time and the mental clarity to understand our own bodies and feelings - or we may simply give in to the distractions in order to escape from the hard work of figuring it out.  So we're unprepared to deal with lust, territorialism, fear, shame, and all the rest.  Music takes all those raw states and presents them safely, as entertainment.  Repeated exposure makes the messy stuff less frightening when it hapens to us.

(Want a laugh?  When we have these intense feelings, we think:  I know what that is - and we start communicating in song lyrics.)

Here's a related thought, about adulthood.  I just got over appendicitis, and during the recovery I was repulsed by the idea of having a beer or a glass of wine.  Alcohol is about experiencing a different state of mind.  When I feel sick, I don't want alcohol, because I'm already away from normal - I want to be normal again.  So maybe music functions to familiarize us with the scary aspects of our ordinary state of mind, and alcohol serves to take us away when it gets boring.
By Unknown Posted Friday, August 05, 2011 5 comments: