The WELL is independent again

The WELL, an online community that predates the World Wide Web, has been purchased by a group of its members.  The WELL began as a dialup bulletin board system in 1985 and was bought by Salon.com during the tech boom of 13 years ago.  Salon fell on hard times (recall its ill-fated IPO) and recently found it necessary to sell The WELL.  A group of WELL members formed an investment group, and purchased the service from Salon effective yesterday.  Here's a charming document describing how The WELL bought itself.

In an age where discussion forums are anonymous and fleeting, The WELL is characterized by long-term membership by passionate, engaged people.  The 11 members who formed the investment group have been on The WELL for an average of 20 years.  Think about that.

Congratulations to The WELL.  I'm glad it will continue.  It adds something to my life that I couldn't easily find elsewhere.  And if nothing else, The WELL can take care of itself.
By Unknown Posted Friday, September 21, 2012 No comments:

Fear of an Earworm

I'm halfway through the article "Fear of a Black President" by Ta-Nehisi Coates in the latest issue of The Atlantic.  It's an insightful and probing discussion of how Barack Obama's race has affected his presidency.  But the most memorable thing about the article so far, for me, is the author's name.

When I became aware of Ta-Nehisi Coates as a cultural critic a few years ago, I assumed the author was a woman.  There's something vaguely feminine about the prefix "Ta" and the ending "isi".  In the discussion of this latest article - I read about the article before I actually read the article - I learned that Coates is a dude.  OK, fine.  Filing away that fragment of cognitive dissonance, I dug into this important cultural artifact.

Mr. Coates points out Obama's embrace of his race:  his unabashed blackness in preferring one rap star over another, in being photographed while a little black boy feels his hair.  These are cultural signals, and they're emanating from the highest office in the nation.  All previous emanations from that office signaled white culture.  Shades of white, from the Stepford-meets-Mad-Men Kennedy White House to the we-mean-business-but-we-horse-around-too presidency of Bush the younger, but all white.  Barack Obama is black, and the fact that he enjoys it and doesn't feel obligated to hide it is revolutionary for this nation.

How, then, does one pronounce Ta-Nehisi?  I'm pretty sure I've got Coates down, but ... tah neh HEE see? tah NEH heh see?

I read, too, about Trayvon Martin's death and how the tenor of the national conversation about it changed after Obama addressed the issue.  All he said was 'if I had a son, he would look like Trayvon' and 'let's understand exactly what happened here, understand everything and investigate everybody'.  And suddenly what had been an uncontroversial tragedy became racialized political fodder.

The name floated through my head while I chopped vegetables, while I drove to work.  It nagged me like an earworm, like a child's choir singing Go Tell It On The Mountain in my head endlessly.  Race relations in America faded into the background.

Some people have excellent visual memories.  My memory is audible.  To dial a phone number, I read it out loud to myself and speak it back as I dial (usually sotto voce).  If I just look at the number, no matter how long, I forget it by the time I've dialed the third digit.  I'm good at remembering how to pronounce words and names.  I need to know I'm saying it right.  It bothered me when my Chinese coworkers wouldn't even tell me if I was pronouncing the name of their damn city correctly (for the record:  Quanzhou = "chen-zo").  So it drove me nuts not knowing how to pronounce this name that was so foreign to me that I couldn't even deduce its gender.

Finally I had an idea.  Tennessee.  Whenever I think of this author, I am mentally going to pronounce his name Tennessee.  Like Tennessee Williams.  Or not so much.  But anyway:  problem solved.  LA LA LA LA LA LA LA.  Now I can go finish the article, and find out how Obama can be black in some ways but not others, unburdened by questions of pronunciation.

Gooooo tell it on the mooooountaaaaain....
By Unknown Posted Thursday, September 20, 2012 4 comments:

Email ThisBlogThis!Share to TwitterShare to FacebookShare to Pinterest
Labels: meta

"Somebody I Used To Know" was at full viral fever level when tickets went on sale this spring.  We paid Ticketbastard, err, Live Nation $50 plus $13 fees per ticket for two decent seats, assuming it would sell out fast.  Evidently it didn't, because they ended up playing on a stage that normally hosts talent shows featuring pimply jugglers.

Our first clue was that several weeks ago Groupon offered tickets at half price.  Consternated would describe my reaction.

Our next clue was not when we went to Live Nation's website and downloaded and printed out the tickets on the day of the event - nope, the site and tickets said Nautica.  Nor did we receive an email - they might have sent one, but apparently as far as our spamfilter is concerned, Live Nation's credibility is comparable to that of ads for discount pharmaceuticals.  No, our next clue came when we were looking for other bands to see, and we stumbled upon a second concert listing for Gotye, on the same day, in a different venue.  *rolls eyes*

What happened?  Did Nautica get sick and have to stay home?  Did Lakewood make them an offer they couldn't refuse?  Based on the attendance we saw (a whole lot of people sitting in cheaper seats behind us, and about 50% butts in the more expensive seats in front of us) Nautica would've been empty.  My guess is that Nautica charges the band a lot of money for the privilege of playing there, and the band moved to Lakewood to cut costs.

We had seats either way.  Lakewood's were even padded, though the amount of kneeroom they provided would have shamed a Third World airline.  And no beer.  That's right, I remember now, THERE'S NO BEER IN HIGH SCHOOLS.

So, the show:  the sound was quite good - I could even understand the lyrics, which is rare.  I enjoyed almost all the music (but see below).  They had captivating video material going on a movie-sized screen at the back of the stage; they must have had several artists make videos to play along with the songs.  They played "Somebody I Used To Know" with the female part sung by the lead singer of the opening act, because Gotye is estrogen deficient.  The only significant negative was the spotlights slashing across my retinas repeatedly.  Seriously, guys, that's obnoxious.  For a couple songs I didn't dare open my eyes.  I can still remember my field of vision filling with peach-pink as the glare burned through my eyelids.

If Gotye reminds me of a band, it's Talking Heads, in their heyday of quirky pop and suspension-of-disbelief lyrics.  Gotye used instruments ranging from up-to-the-minute (programmable touchscreens like those pioneered recently by Bjork) to historical (the Suzuki Omnichord from the mid-80s).  There was a lot of percussion.  They were literally tripping over drums on that stage.

The videos got me thinking.  They were in time with the music, so that could mean they perform the songs exactly the same way every time - or that they brought the videographers along with them to tweak the videos when they want to change the way they play a song.  A lot of bands do use road trips to refine their songs, and this would prevent Gotye from doing that.  Or, it could mean that the videos were in short pieces, and the pieces were triggered by one of those up-to-the-minute tabletty things.  (Which is yet another job the keyboardist has to do.)  That would allow them to rearrange the songs at will.

But, as I mentioned, I only enjoyed *almost* all the music.  The last three songs of the encore were something different entirely.  By that point, I had gotten used to Gotye's brand of weird, so when the home stretch was really ordinary instead, I was completely thrown.  It was major-key crowdpleasing arena rock.  It was like the '80s Top 40 came back to life for fifteen minutes.  And the crowd loved it.  Alice turned to me and actually asked if our intelligence was being insulted.  I said no, but I wasn't sure I wanted to find out what came next.

And then the show was over.  What a trip.
By Unknown Posted Monday, September 17, 2012 No comments:

A Venn diagram: my next car 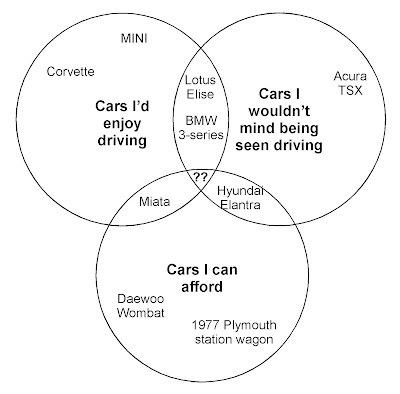 The problem with Corvettes is, once you buy one, you become a Corvette Owner.  A lot of people say the same about BMWs, but I like the cars so much I'm willing to let people assume I'm a jackass and learn otherwise later.

But seriously, the candidates for the bullseye position are:  (a) used Hyundai Genesis Coupe, or (b) rather-more-used Infiniti G35.

There are, of course, other circles not pictured:  Reliability, Wife Acceptance Factor, etc.
By Unknown Posted Wednesday, September 12, 2012 4 comments: