Pearl onions are a pain in the ass, but engineering can help you peel them. 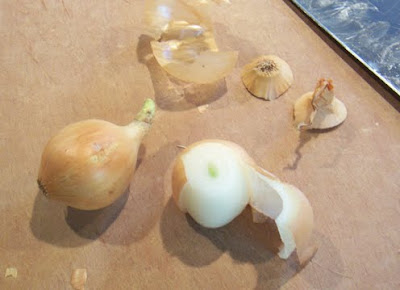 I'm making a side dish that calls for peas and whole peeled pearl onions. With big onions, you can usually just flake off that outer layer, but it doesn't work with pearl onions. I have no idea why. The solution is to carefully cut from pole to pole one layer farther down - through the outermost edible layer of the onion. Remove that, and you're golden. But even that edible layer will balk at being peeled off a sphere. You can't just pull it outwards like an orange rind or it'll break.

What does this have to do with fracture mechanics, you ask? What you're really doing is propagating a crack. There are three ways to crack something:

The magic way to peel an onion is Mode 2, illustrated in the photo above. You lift the edge of that edible layer, creating a crack between the layer and the onion beneath. Then you push that edible layer sideways on the onion (counterclockwise in the photo). It's counterintuitive that the best way to separate a layer from what's underneath it is to slide it sideways, but it keeps it whole so it comes off neatly.

And that's your engineering lesson for the day.

The double-edged sword of iPhone ubiquity

I have an iPod Touch, which is sort of like an iPhone without the phone. (Or, to be up-to-the-minute, like a pocketable iPad.) The great advantage is that it can run iPhone apps, and since there are millions of iPhones out there, that's a lot of capability on a cheaper device. But all those iPhone apps take network connectivity for granted - so if my iPod is out of wifi coverage, many of them don't work right.

For an iPhone app developer, the iPod represents a niche market. There are some apps that iPhone users are likely to need on a plane, so there's an incentive to make them work well offline. Byline, the blog feed reader, is a great example. But most developers don't put a lot of effort into it.

The example that got me thinking about this is wine. I keep track of wines I've liked--and disliked--and what I've got in the house. Cellartracker.com is a great service for this, and there's an iPhone app, cor.kz, that interfaces with it. Cor.kz gives all kinds of other information, like prices and user reviews, that leverage the power of the cloud. But in the proces of providing that extra functionality, they made it too dependent on the Internet. The app won't even start without a network connection. It doesn't bother to store the contents of your cellar on the device.

Seth Godin has described "a culture of clickers, stumblers and jaded spectators who decide in the space of a moment whether to watch and participate (or not)". Even though I watch very little TV, what he says resonates for me: often enough I find myself skimming RSS feeds, disengaged. When I become aware of it, I try to turn it around and create something out of it.

Godin's "wow" is the overwhelming, the unattainable. Is your workplace as rough as the Arctic? Can you enter a beater car in an international rally race and come in third? Just as we professionalize our entertainment and even something as instinctive as feeding ourselves, so do these stories wow us into submission.

This narcotic intake of information also distances you from the Zen ideal of focus. Focus, in this view, might be called monotasking. It's doing only what you're doing, being only where and when you are. In Wisdom 2.0, Soren Gordhamer argues that you will only do your best and most creative work when you're thinking about nothing but the task at hand.

I remember hearing, at the height of the Napster phenomenon, about the listening habits of an acquaintance's teenage son. The boy would sit at the computer and click, listen to three seconds of a song, and move on, meanwhile either downloading it or not. The equivalent for me are sites like AcidCow (images) and the Cheezburger Network (captioned photos). The flood of information washes over me, and I batten down the hatches to pass through it more efficiently. It hardly occurs to me to do something with it - submit some photos of my own pets to LOLdogs, or collect some of AcidCow's images into a set that tells a story. But I fight that tendency. When I respond in some way to the flow of information, I try to grab that response and imagine what else I could do with it. I'm doing that with a set of AcidCow photos now - you'll see it in a post to come.
By Unknown Posted Friday, April 02, 2010 2 comments:

I like cars, and I like to read and talk about cars. As much as I love Jalopnik, Gawker Media's car site, I'm saying this here because it goes to the core of who I am: I have no time for anyone's haughty ridicule or righteous indignation. Jalopnik has unfortunately become a car hipster site.

What do I mean when I say hipster? (Note: I have not actually visited that link, for reasons that should be obvious.) Think of the Comic Book Guy on The Simpsons. Or there are film critics writing today who arguably hate films. They heap praise on film noir but have nothing positive to say about anything current and widely distributed enough for you to have a chance to see it.

Perhaps most familiar, music hipsters are fans who'll tell you your favorite band sucks, and argue amongst themselves whether any band could ever be as great as Pavement was.

Stan Lee, film noir, and Pavement are all great, but that doesn't mean that everything else is worthless. To say so is to gradually suck the joy out of the lives of those around you.

When Jalopnik wrote the Awesomeness Manifesto, I applauded their commitment to staying true to what they love. I assumed they'd soon be writing three or four posts a day instead of the usual twenty or more. Not so: they kept up the pace. Instead of describing a mediocre car as being better than the others in a class that's not to their taste, we got these snarling dismissals:

"2011 Infiniti QX: everybody point and laugh"

"The most ridiculous Lamborghini spoiler you'll ever see"

I won't quit reading Jalopnik over this, but I had to get it off my chest. They're at their best when they write about the 24 Hours of Lemons, or the Texas Mile, or even the "carpocalypse" the industry is going through. There's enough love there for me to scroll past the hate.
By Unknown Posted Thursday, April 01, 2010 4 comments: