I recently returned from Quanzhou, which is across the strait from Taiwan. I'd been there twice before, to visit my company's factory, but I never saw the city's historic sites until now. I visited the 1300-year-old Kaiyuan Temple, the giant equestrian statue of Koxinga, the 1000-year-old Luoyang Bridge, and a scenic area on top of Mt. Qingyuan. I always like to see the old stuff when I travel, so this was a wonderful surprise. 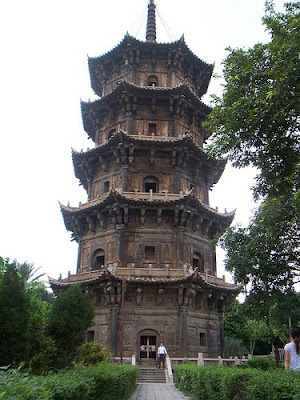 Quanzhou was once the biggest port in the area, one of the starting points for the Silk Road. The Kaiyuan Temple contains two lighthouses, each about 150 feet high, that were used by mariners. (That's me at the bottom.) The temple complex is right in the middle of town, but is secluded from the hustle and bustle and quite peaceful. The site is both a tourist attraction and an active religious destination. Here are the photos I took there. 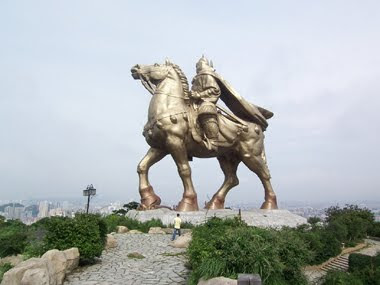 General Zheng Chenggong, also known as Koxinga, lived in Quanzhou and won Taiwan back from Holland in 1661. The Dutch had held the island for 38 years. A few years ago, an enormous gold statue of Koxinga on horseback was erected on a mountaintop visible from the streets of Quanzhou. It's 125 feet high and pretty amazing. Check out the photos on flickr, where the statue looms larger and larger as you get closer to it. 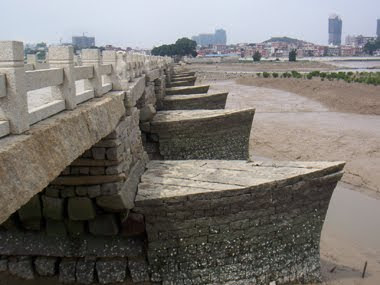 The Luoyang Bridge crosses the Luoyang River, which is wide and low at this point a few miles from the Pacific Ocean. Actually, when I visited, the tide was low, so there was hardly any water at all. Judging from the height of the bridge's supports, it never gets very deep. As a scientist I was amazed by the bridge's construction: the supports are about 10 meters apart, and are spanned by stone beams. Each beam is about nine meters long, a meter thick, and maybe two feet wide. Astonishingly, none of them appear to have ever broken in the bridge's 1000 years of service! I also appreciate the fact that they erected a statue to the guy who made it possible. Here's the photos. 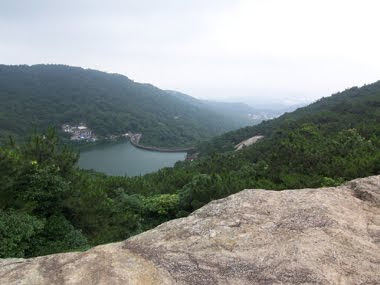 Lastly we visited Mt. Qingyuan, which at 500 meters is the highest peak in the area. It was quiet and peaceful up there, and we had a lovely outdoor lunch, though I suspect it was that meal that disagreed with me (see previous post). I must have missed the statue of Lao-tzu, the founder of Taoism, because I certainly would have taken a picture of it. In any case, the temple was lovely and the turtles in their pond were very happy. Here it is on flickr.

Quanzhou is a relatively small city, with only 500,000 people inside the city limits. The streets are very busy, but growth has been calmer than in boomtowns like Shenzhen. It has a hometown feel to it, and I'll be happy to return.
By Unknown Posted Friday, June 25, 2010

Email ThisBlogThis!Share to TwitterShare to FacebookShare to Pinterest
Labels: travel