Please use the comments area to discuss getting a new organizer for the blogger meetup group.
By Unknown Posted Monday, August 31, 2009 7 comments:

On Saturday we threw a party for my 40th birthday. We invited old friends and new - family, coworkers, bloggers, wine tasters, people from all sides of my life. It was what you'd expect a party to be: hard work to prepare for, a little chaotic to execute, and a lot of fun to experience and remember.

It must have been a little odd for my coworkers (just to pick an example) to look around at 30-odd unfamiliar faces and wonder what to say. Should I have celebrated my birthday with cupcakes at work, and later opened a fine bottle with my fellow wine afficionados, and so on, just to keep them all comfortable? I don't think so. I've become convinced that we need these aimless conversations with new people to expand our lives. There is also a place for ever-deeper conversations with those who know us well, but that isn't enough. They say it takes a village to raise a child. I say we all need villages. If there has been any lesson in the last 18 months of my life, that is it.

There are some pictures on Facebook (my profile is public). More have been graciously posted by Heidi Cool at her flickr stream. Thanks Heidi!
By Unknown Posted Monday, August 24, 2009 2 comments:

Email ThisBlogThis!Share to TwitterShare to FacebookShare to Pinterest
Labels: meta

How to: repair a broken fan in an external hard drive


I'm feeling kind of proud of myself after this ordeal, so I decided to post about it. 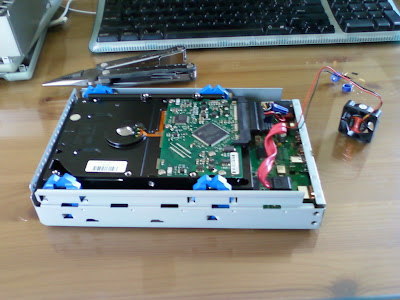 A couple months after I bought this Maxtor OneTouch III external hard drive, it started making honking, buzzing noises. I like the fact that the enclosure has a fan (most don't) to actively keep the drive cool; I've had drives fail from overheating in the past. After a couple more months of ugly noises, it fell silent; the fan was dead. I decided to either repair the enclosure or move the drive to a new one.

I found it remarkably difficult to open. This page instructs you to open the drive by making yourself a finicky little tool to pop open several internal hooks. However, this YouTube video tells you you can just tear it off with brute force. I opted for the latter. (I have a spare enclosure in case this one couldn't be reassembled.)

The fan is tiny, only 30mm square. I found only this one in that size, so I ordered a couple. Once they arrived, I discovered they run on 12V whereas the fan they're replacing runs on 5V. DC motors usually will run on lower voltages, only slower, so I gave it a try. However, using a variable voltage source I found that the new fan would not start moving until the voltage exceeded 9V, so the 5V source wouldn't cut it.

Luckily the enclosure's power brick supplies 12V, so I knew it would be available in there somewhere. It turned out that two of the four power wires feeding the drive itself carried 12V, so I spliced them to tap in the fan wires. The drive wires were very short. The only way I was able to make the spliced wire reach the drive was by cutting all the excess plastic off the bottom of the twist connectors (blue, at the upper right corner in the photo). 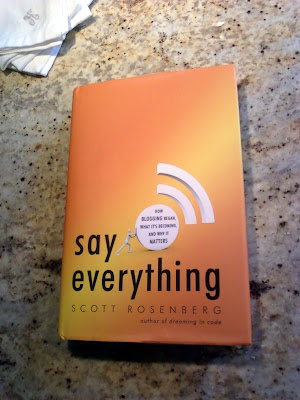 Scott Rosenberg, Salon's co-founder and tech columnist, has written a book about blogging. I've always appreciated the long-range perspective he brings to tech issues, where so much of the coverage provides up-to-the-minute detail but no meaningful context. I mentioned on the Social Media Club site that this book will be discussed on a publicly-readable part of The WELL, starting September 2. Normally The WELL provides an email address where nonmembers can send questions for the author.

The current plan is that I will lead the discussion - though that means little more than keeping it from wandering too far afield. I'm absolutely flattered at that; the WELL is home turf for some real powers in the blogging world: Bruce Sterling (Wired, etc), Mark Frauenfelder (BoingBoing, MAKE), etc. What I hope to bring to the discussion is my perspective as a recent learner of blogging alongside other, newer social media services. What I hope to learn from the book is how network-building has been put into action in blogging. I'm looking forward to spending my next few weeks with the book.
By Unknown Posted Sunday, August 09, 2009 1 comment:

Email ThisBlogThis!Share to TwitterShare to FacebookShare to Pinterest
Labels: socialmedia

Debugging and the Scientific Method

The coders among you will appreciate this: Can we teach debugging? The post talks about debugging as a programmer-specific application of the scientific method, and suggests that we should do a better job of teaching it. I agree. In fact, I was shocked to realize that this was the first time I can recall anyone actually defining "the scientific method" for me. I've never been anything but a scientist, but evidently the philosophy of science wasn't core curriculum in my schools.

The author doesn't actually identify himself at flatline.net, but I found it from a link in his other blog. He is a designer, art metalworker, MAKEr, etc., and lives in the Pittsburgh area, not too far from here. And just because I like to illuminate connections, I'll tell you that you could find All Art Burns, and this blog, in the unofficial WELL blogs aggregator.
By Unknown Posted Sunday, August 09, 2009 No comments:

Email ThisBlogThis!Share to TwitterShare to FacebookShare to Pinterest
Labels: professional

Swimming in the Blue Hole

Oh, oh, oh, this guy is good. When you get a few minutes, read this. "Time to eat the dogs" is quite a name for a blog - it refers to that moment in an Arctic expedition when drastic measures have to be taken to preserve life. The blog is about exploration of the natural world, but this post is more personal.

Robinson's post starts with a nagging desire to push his own limits, a theme I've touched on a few times myself. Doing so, he has a shocking, perspective-altering experience, and it becomes a touchstone among his friends for decades. A metaphor. Milan Kundera once wrote that metaphors are dangerous: to assign meaning to a chance event on a first date can influence a relationship forever. Robinson also addresses this, finally wondering after decades if shock is really necessary for growth.

My own life has been a punctuated equilibrium, eras of stasis interrupted by short periods of total openness, rearrangement, and change. Only now am I finally finding a happy medium. I'm always happy to hear from fellow travelers like this.
By Unknown Posted Thursday, August 06, 2009 2 comments: